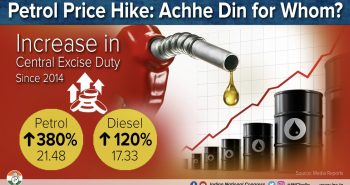 For the second day consecutively on Tuesday petrol and diesel  prices continue their northward march across the country with national oil marketing companies increasing them.  At Indian Oil Corporation outlets in Hyderabad petrol has become more expensive by 16 paise a litre and diesel by 24 paise at Indian Oil Corporation outlets.  The new price of petrol, at IOC outlets, is Rs.79.39, while that of diesel is Rs.72.13.  The increase is now 35 paise a litre for petrol and 50 paise for diesel. There will be a variation for few paise per litre in pump prices at the outlets of the three companies – IOC, HPCL and BPCL . Price revision is in practice for almost a year now, but Monday’s increase came nearly three weeks after the first the previous revision on April 24.  Their decision to hold the fuel prices was widely believed to be linked to the Karnataka Legislative Assembly elections, something that was denied by oil companies.  A top official of the oil industry had said since the prevailing international oil product prices were not supported by fundamentals it was decided to temporarily moderate retail prices by not passing on the required increase to the consumers.