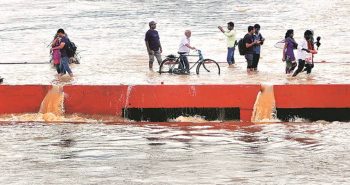 The Sangli boat accident of Maharashtra has lead to an increase in the death toll reaching 40 with discovery of five more bodies. From Kolhapur and Sangli 3.7 lakh people have been evacuated from flood – affected areas. Total number is more than 4 lakh people. On Monday after the meeting Chief Secretary will finalise   the memorandum to be sent to the Centre for financial and other aid to tackle the floods. “The Chief Secretary has called a meeting at 11 a.m. and another at 5 p.m.,” an official of the State Relief and Rehabilitation department said. The farmland of over one lakh hectare in Kolhapur and Sangli districts have been affected. “At present, we are concentrating on rescue work. Once the water recedes, we will calculate the actual losses. Based on that a report will be sent to the Centre for aid,” Mr Mehta had said. As per the  National Disaster Management Authority guidelines,Congress demanded  that the floods be declared an ‘L3’ (very large-scale) disaster . Congress general secretary Sachin Sawant has sent a letter to  Chief Minister Devendra Fadnavis, Maharashtra stating that , “So far, the Centre has not provided any major assistance. With this, it would become mandatory for the Centre to assist the flood-affected people.”  70 tehsils and 761 villages in Kolhapur, Sangli, Thane, Nashik, Palghar, Ratnagiri, Raigad and Sindhudurg districts have been severely affected by the extensive floods.