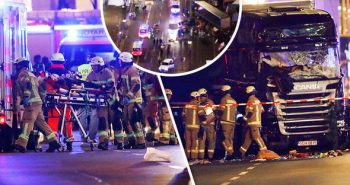 A truck slammed into a crowded Christmas market in central Berlin on Monday night, killing at least 12 people and injures 48, in what authorities are investigating as a possible terrorist attack.

Police said on Twitter that they had taken one suspect into custody and that another passenger from the truck had died as it crashed into people gathered around wooden huts serving mulled wine and sausages at the foot of the Kaiser Wilhelm memorial church in the heart of former West Berlin.

Germany was put on high alert for a major terror attack in the months after Mrs Merkel opened the country’s borders to more than one million refugees from the Middle East.

The White House on Monday condemned what it called “what appears to have been a terrorist attack”.