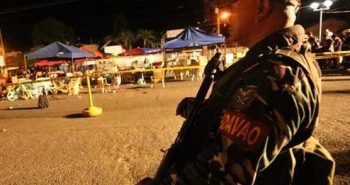 At least 13 people, including one police officer, were injured in the explosion, outside a Catholic Church during a Christmas Eve Mass in North Cotabato ,Mindanao on Saturday evening, December 24.

Fr. Jay Virador of the Oblates of Mary Immaculate, co-presider of the Nativity of the Lord Mass, said the explosion took place at around 9.45 p.m. (1345GMT) Saturday outside the Sto. Nino Parish church in Midsayap town of North Cotabato province.

“The Holy Mass was abruptly ended, no more concluding prayers as there was a commotion,” he was quoted as saying by The Philippine Inquirer. “People hurriedly left the church.”

No group has claimed responsibility for the blast. Authorities are investigating the blast and did not immediately say who they thought was responsible.