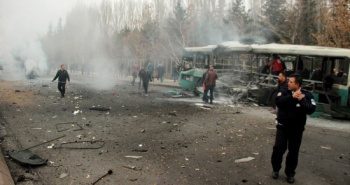 A car-bomb attack on a bus carrying off-duty military personnel killed 14 soldiers and wounded 55 in the central Turkish city of Kayseri on Saturday.

A military spokesman said the soldiers were about to go on leave, and that there may also have been civilian casualties. The wounded were being taken to hospitals in the region.

The blast near a university campus comes a week after deadly twin bombing targeted police in Istanbul and may further infuriate a public smarting from multiple attacks by Islamic and Kurdish militants this year, and a failed coup in July

“We know that these attacks we have endured are not unrelated to happenings in Syria and Iraq, or even our economical fluctuations,” Erdogan said.