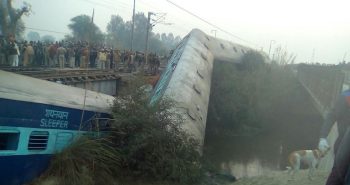 At least 2 persons were killed and 44 people were injured after 15 coaches of the Train no. 12988 Sealdah-Ajmer Express derailed between the Rura and Metha railway stations in Uttar Pradesh’s Kanpur city around 5:20 am on Wednesday morning.

The incident took place near Rura railway station, 70 km from here, when the train was crossing a bridge overhead a dry canal in the area, Northern Central Railways PRO Amit Malviya said.

“A rescue team has rushed to the spot and a medical relief train from Kanpur has also been sent to the accident site. Currently we are focusing on relief and rescue operations,” Railway spokesperson Anil Saxena said.