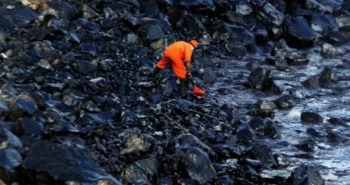 Last week In ennore fort nearby Chennai two cargo ships collided, from one of the ships the crude oil had leaked in the sea due to this now there is a polluted environmental scenario is happening, the oil get well mixed with water.

In this situation the amount of oil which has leaked in the sea has been estimates as 20 ton, and this will affect the water living creatures and plants not only now this effect of pollution in the water will extend in the time period.

First they reported that only 1 ton oil has split in to sea but now its 20 tons but the total capacity of that cargo ship is 200 tons.