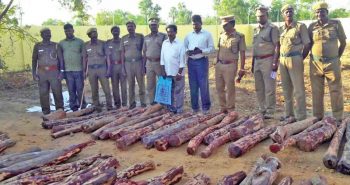 In a major breakthrough against timber mafia dealing with red sanders in Kancheepuram, foresters on Wednesday arrested 3 persons and confiscated 20 tonne red sanders from a godown in Hanumanthapuram.

According to forest department sources, a special team was formed to monitor the godown and the movement of trucks. When foresters noted something fishy with the number plates of trucks parked inside the godown, the special team raided the godown on Tuesday night and found red sanders kept ready for dispatch.

All the three arrested are part of a network operated from Vyasarpadi in north Chennai and kingpin Appu Ajith is absconding. Two workers from Bihar working at the godown were also detained for further investigations, foresters said. District forest officer Ritto Cyriac, who monitored the operations, congratulated the team for confiscating red sanders worth Rs .5 cr.

Pandu Rangam and Vijayakumar also involved in the trade are also booked. Several leads have been obtained in this case and three vehicles including two lorries worth Rs 50 lakh had also been seized and are under judicial custody. There will be more arrests in this case, the foresters said.