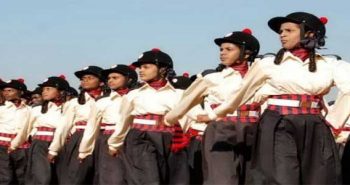 Cyberabad Police were in a dilemma since The Republic Day was just a few days away.  The Police band was unavailable to tune the march past as the constables of the existing musical band opted to join the neighbouring Rachakonda police commissionerate following bifurcation of the police force in the west side of the capital.  Police Commissioner Sandeep Shandilya sought help  from fellow police organizations but could not succeed as everyone had  a  parade.  Then the Telangana Social Welfare Residential Educational Institutions Society(TSWREIS)was contacted for the student’s music band and they were happy to oblige.  It was claps to the 23 member all girls band of TSWREIS from Narsingi school as they did not  even get one beat  wrong  during the entire ceremony.  “The students absolutely enthralled the audience.  They practised two days before and passed our test in the first attempt itself,” said a happy Mr. Shandilya.   TSWREIS was even more thrilled,“Our band performed first time outside and it is a matter of great pride that the constables marched to their beat.”   Mahendra Hills,Gowlidody and Shamirpet have society schools with music band.  All  social welfare hostels would be having full fledged music bands with all instruments very soon.  Retired police Officers would be hired to teach  children and they already have music teachers.  Each girl would be getting Rs.1500 as cash prize.  This was announced by Cyberabad  commissioner and they are to be taken to Crosswords or Walden to pick books of their choice.