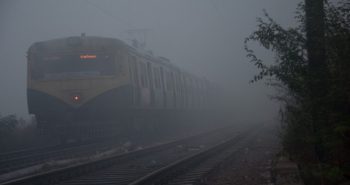 At least 24 trains were delayed 5 others were rescheduled and one cancelled on Monday due to dense fog in most parts of north India, a railway official said.

According to the Northern Railway official, the Jogbani-Anand Vihar Express was running over 13 hours behind schedule, the Swatantrata Senani Express was 15 hours late and the Shaheed Express was over 11 hours late.

According to the Delhi International Airport Limited, which manages operations at the Indira Gandhi International airport in Delhi, 6 international and 8 domestic flights to and from Delhi were delayed following poor visibility caused due to foggy weather.

The Indian Meteorological Department had predicted moderate fog in New Delhi on Monday morning. It added that the minimum and maximum temperatures in the national capital would hover around seven and 23 degree Celsius respectively.