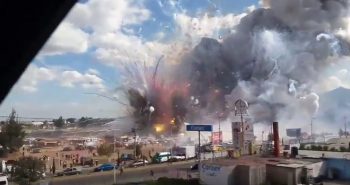 A series of explosions tore through a sprawling fireworks market outside Mexico City on Tuesday, injuring scores and killing dozens. A huge plume of smoke was seen rising into the sky following the blast.

Mexican officials said at least 70 people were injured by the blasts at the San Pablito Market in Tultepec, about 20 miles north of the capital. Mexico State Gov. Eruviel Ávila reported 29 deaths so far. According to state and local officials, the third time in 11 years that the market was destroyed by explosions.

The market was packed at the time with customers buying pyrotechnics for traditional end-of-year festivities. Christmas and New Year’s parties in many Latin American countries very often wrap up with clattering firework blasts.

Fire crews struggled for three hours before bringing the blaze under control.

A bystander caught the dramatic scene in a video posted to YouTube.