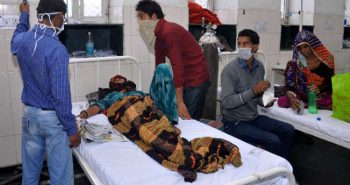 In Guntur a 49-year-old man died of swine flu.  This is the first such death reported in the district.  Mr.Lanka visveswara Rao  was working in a jewelllery  making unit in Tenali.  He died in Vijayawada a few days after he was diagnosed with swine flu.  In the first week of February Mr.Rao showed symptoms of dry cough,cold and weakness.On February 7 he was admitted to the Government General hospital.  His samples were sent to Tirupati after doctors conducted tests.  Results  were expected on February 9 but he passed away before that.  Doctors confirmed that he died of swine flu when they received the results.  A team of doctors rushed to tenali and distributed tamilflu tablets.  The deceased has left behind  his wife Gowri,daughter Ramya Sudha ans son Karthik.  His family members are in ashock on receiving the news.  His children are yet to complete schooling.