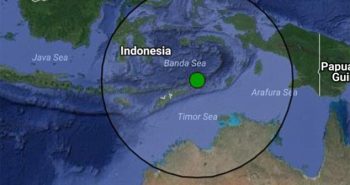 A 6.5-magnitude earthquake has rattled the Northern Territory and parts of Indonesia, with residents in Darwin this morning, reporting widespread shaking but no reports of damage.

The quake struck at a depth of 180km in the Banda Sea off the coast of eastern Indonesia about 11.17am, Geoscience Australia Earthquakes advised.

People had recorded feeling the earthquake from Yirrkala in Eastern Arnhem Land, 650km east of Darwin all the way to Katherine, 270km south.

The quake has not led to the issuing of any Tusnami warnings – for Australia, Indonesia or East Timor.

The Banda Sea lies on the so-called Ring of Fire, the source of about 90 per cent of the world’s earthquakes.