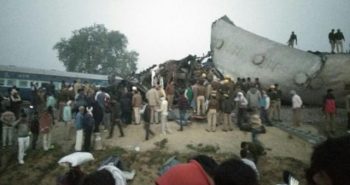 At least 63 people were killed early on Sunday morning when 14 coaches of the Patna-Indore Express derailed near Pukhrayan area in the Kanpur Dehat district, officials said.

The incident took place at around 3am near Pukhrayan, about 100 kms from Kanpur.

“Death toll has risen to 63,” IG Kanpur, Zaki Ahmed told new agency ANI. According to railway officials, the casualties could rise as the rescue operations are under way.

“Over 150 injured people have been rushed to nearby hospitals in the area. All hospitals have been asked to be on alert. More than 30 ambulances are pressed into service,” the IG said.

Meanwhile, Railways Minister Suresh Prabhu has ordered a probe into the train tragedy.

“All rescue relief work on to deal with an unfortunate accident. All medical and other help rushed. The inquiry ordered. Situation monitored closely,” Prabhu said in a tweet.

15 Coaches of Sealdah-Ajmer Express derail near Kanpur; 2 killed and 44 injured