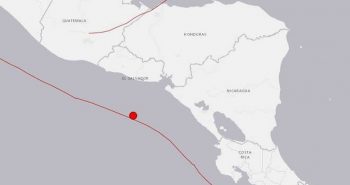 An earthquake hit El Salvador and Nicaragua just an hour after hurricane Otto made landfall along Nicaragua’s eastern coast.

According to AFP, the US Geological Survey said the epicenter of the earthquake, which measured 7.0 on the Richter Scale, was at a depth of 20 miles beneath the Pacific Ocean. There were no reports of casualty.

The earthquake struck at 1:43 p.m. Eastern west of El Salvador. A few hundred miles east, Otto reached landfall between Costa Rica and Nicaragua at 1 p.m., according to the National Hurricane Center.