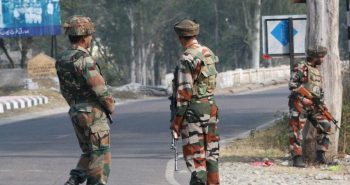 Seven Indian Army personnel, including two officers, died in an attack on a military base in the Indian Held Kashmir (IHK) early Tuesday, military officials said.

On Tuesday, according to a police officer, an unknown number of militants barged into the field regiment camp in the Nagrota cantonment near the headquarters of the Indian Army’s 16 Corps  in Jammu and Kashmir around 5.30 am. The militants were carrying automatic weapons and explosives and they started firing indiscriminately at the Officers’ Mess inside the camp.

After around eight hours of heavy exchange of fire, security forces managed to kill three terrorists, however, the number of militants who entered the army premises could not be confirmed.

A police officer of Reasi district, said, “We have sounded an alert. Security has been beefed up at Katra and other areas of the shrine after the attack at an army camp in Nagrota”.