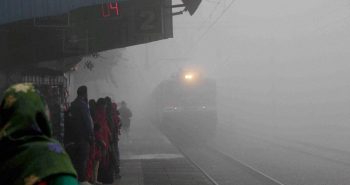 At least 70 trains were arriving late in Del area, 22 trains were rescheduled while 7 trains were cancelled due to dense fog in parts of north India on Wednesday morning, a railway official said.

The weatherman said the maximum temperature in Delhi is expected to remain unchanged for the next two days.

The minimum temperature may rise by one degree on Friday.