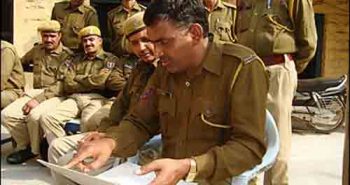 In Andhra Pradesh on Monday an unidentified woman was found brutally murdered in the outskirts of Tavanampalle mandal Headquarters.  The woman was crushed with a boulder and is believed to be a software engineer clad  in modern clothes.  The woman’s body was found close to the village tank.Chittoor rural (west) police rushed to the spot and started investigation.  Police found multiple injuries on abdomen and limbs apart from head injury.  There was no missing case in mandal in recent days.  As per circle inspector M.Adinarayana Reddy the woman might have been brought here on Sunday night by some unidentified people.  Facts would be ascertained only after the post- mortem.   In another incident a 45 year-old unidentified man committed suicide by  jumping before a train on Monday.  Eyewitnesses said that man  was standing close to the railway track.  Passers by  and others waiting at the level crossing thought that he was waiting for the gates to open.  But all of a sudden when the train was approaching he walked towards the track and got killed on the spot.  Others shouted in vain.  The body was lying on the track for several hours.