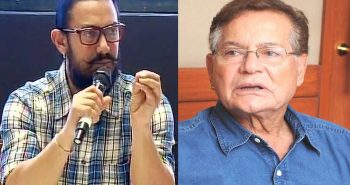 Just when one thought that the law and order prevail in India, the mass molestation of women in Bengaluru on New Year’s eve collectively shocked the entire nation. Adding oil to the fire, politicians like Karnataka’s Home Minister G. Parameshwara and Samajwadi Party MLA Abu Azmi’s statements angered the country more when they blamed women’s dressing and western culture for the incident.

Salim took to Twitter to address Prime Minister Narendra Modi, saying that the matter needed to be looked at immediately. He wrote, “Honble PM Narendrabhai, you have time and again mentioned that Indias youth will drive the country forward. Its a shame what the youth have done in Bngluru. Such acts are happning rptdly all ovr. We were also young once bt nvr have such things happnd. Narendrabhai the power of the youth is double edged it can go either way. You need to address it immediately @narendramodi @PMOIndia.”

“What happened in Bangalore was very sad. We all are saddened and feel ashamed when something like this happens in our country. Every state government should take a step for this,” Aamir told reporters in Mumbai.

“In today’s age, people who misbehave with girls think ‘nothing will happen to us’. When such examples come in front of us, that whoever did this is behind bars within 2-3 months, and continuously if we see this, situation will change. There will be fear among people, which is a very important thing,” the actor said.

Aamir Khan’s ‘Dangal’ film all set to become the biggest hit of 2016!

Aamir Khan’s Dangal has an impressive opening in US, Canada