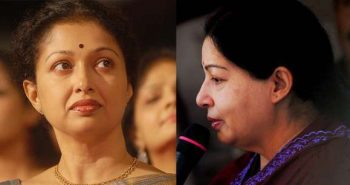 When actress Gautami paid her last respect to former Chief Minister Jayalalithaa on Tuesday, she broke down and could not control her tears.  Now the actress has sent a letter to Prime Minister Narendra Modi raising serious doubts about Jayalalithaa’s death.

In the letter posted in her official blog, the link of which was shared on the Prime Minister’s Twitter handle, Gautami said Jayalalithaa’s “demise is all the more tragic and unsettling because of the circumstances over the past few months and the sheer volume of unanswered questions about our late Chief Minister’s hospitalization, treatment, reported recovery and very sudden passing.”

She further wrote, “There has been a near total blanketing of information regarding these matters. Nobody had been allowed access to her and many dignitaries who visited her with deep concern were denied an opportunity to convey their wishes in person.  Why this secrecy and isolation of a beloved public leader and the head of the Tamil Nadu government? What/whose authority restricted access to the late chief minister? Who were the concerned persons who were making the decisions about Selvi Dr. J Jayalalithaa ji’s treatment and care when her health was apparently in such a delicate state? And who is responsible for these answers to the people? These and many other burning questions are being asked by the people of Tamil Nadu and I echo their voice in bringing them to your ears, sir.”

“I am writing to you now, sir, with the complete confidence that you share my anxiety and determination to uphold the rights of every Indian to be aware and informed of any factor that impacts our day to day life. You have proven yourself in many ways to be a leader who is unafraid to stand up for the rights of the common man and I am confident that you will heed the call of your fellow countrymen,” she added.