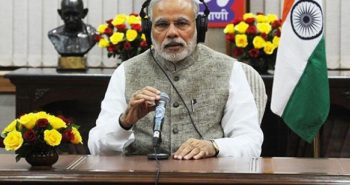 Prime Minister Narendra Modi on Sunday reiterated that his Government will soon operationalise a strong law to effectively deal with ‘benami’ properties to carry forward the ‘war’ against black money and corruption and this was just the beginning.

In his last Mann Ki Baat of the year, Modi said the government will soon operationalise a strong law to effectively deal with ‘benami’ properties. “We will take action against ‘benami’ property. This is major step to eradicate corruption and black money… We are going to take action against the properties which are purchased in the name of others (benami). That is the property of the country,” said the prime minister.

“I assure you that this is not the end. This is just the beginning in our fight against corruption. We have to win this war against corruption and black money. There is no question of stopping or going back in this fight,” he said.

“We have retrieved it and turned it into an incisive law against ‘Benami Property’. In the coming days, this law will also become operational. For the benefit of the nation, for the benefit of the people, whatever needs to be done will be accorded our top priority,” he said.

PM Modi also talked about the Benami Property law that came into being in 1988, but neither its rules were framed, nor was it notified and laid dormant for years.

The government has already enacted the Benami Transactions (Prohibition) Amendment Act, 2016 which provides for rigorous imprisonment of up to seven years, and a fine which may extend to 25 per cent of the fair market value of the benami property.