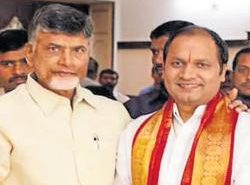 After the Central Bureau of Investigation (CBI), along with Enforcement Directorate (ED), has joined the probe against mining baron Sekhar Reddy following the Income Tax (IT) department seizure of over Rs 130 crore worth cash and 127 kg of gold from him, the Government of Andhra Pradesh has decided to expel J Sekhar Reddy, from Chennai, from the Tirumala Tirupati Devasthanams Trust Board.

Following instructions from Chief Minister Chandrababu Naidu to the Department of Endowments, Shekar Reddy was removed from the trust board of Tirumala Tirupati Devasthanams.

The Income Tax Department yesterday said it had seized unaccounted assets worth over Rs 142 crore — including about Rs 10 crore in new notes and gold bars weighing 127 kg –during searches at multiple locations in Chennai.

S Reddy, a contractor working with the state government, had claimed the entire money and the gold as his own and was being questioned along with few other people, it said.