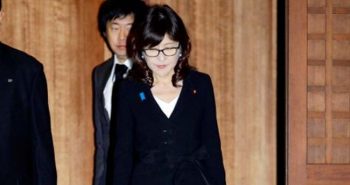 “I put Defense Minister Tomomi Inada in the visitor’s log as my name,” the minister told reporters after her visit. “Tomomi Inada, who is the defense minister, paid respects as a citizen of this country.”

“Whatever historical view one may have, any country would understand the act of expressing appreciation and tribute to those who sacrificed their lives for their own country,” Ms. Inada said after the visit.

Ms Inada joined Mr Abe and Barack Obama on Tuesday for the first visit by a Japanese leader and a US president to Pearl Harbor to commemorate the victims of the Japanese attack 75 years ago.

Japan PM Shinzo Abe: TPP would be “meaningless” without the US