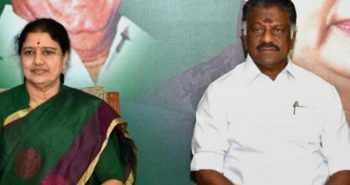 The Election Commission on Thursday allotted the ‘Hat’ symbol to the Sasikala camp of AIADMK, and said the new party would be named AIADMK Amma.

The EC also stated that the O Panneerselvam camp would use the ‘Electric Pole’ symbol and the new party formed by its faction would be called ‘AIADMK Puratchi Thalaivi Amma’. This signals a split in the 45-year-old party following the death of Jayalalithaa.

The EC had earlier allotted the ‘Autorickshaw’ symbol to the Sasikala camp, but changed it to ‘Hat’ on its request.

The VK Sasikala camp in the AIADMK on Thursday told the Election Commission that it wanted to name the party ‘ADMK Amma’.

The EC had given the Sasikala camp the option of choosing ‘Auto’, ‘Bat’ or ‘Cap’ as its symbol.

The EC had on Wednesday frozen the AIADMK symbol of ‘Two Leaves’ after both the Panneerselvam camp and the Sasikala camp approached it claiming rights to the symbol.

Instead, it had asked both camps to select new party symbols.