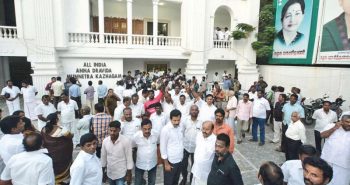 The All India Dravida Munnetra Kazhagam is all set to call for its first General Council meet post J Jayalalithaa’s death on December 29. While the official announcement is yet to be made, party sources have confirmed that the meet is likely to take place on the 29th at  Srivaru Kalyana Mandapam at Vanagaram. The executive meeting will be held at 9.30 am, and later the general council will meet.

AIADMK is stepping into a new phase and new leadership. This meeting is expected to make Sasikala the new face of the party. Chief Minister O Panneerselvam, Deputy Speaker of Lok Sabha and leader of AIADMK’s parliamentary party, M Thambidurai, and all State Ministers have proposed Sasikala as the next general secretary.

Flash NEWS : Police burst into resort to save the MLAs:-