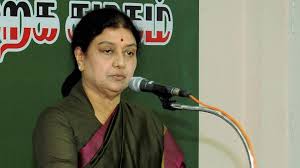 The AIADMK urged on Monday party supremo Sasikala Natarajan to “immediately” take over as Tamil Nadu chief minister to carry on the work done by former CM J Jayalalithaa, who passed away last month.

In a statement Thambidurai said,  “I emphatically request that Chinnamma has to immediately take over the leadership of the government, as the chief minister of Tamil Nadu acceding to the wishes and requests of party workers and cadres like me”.

Thambidurai further said Sasikala had the intelligence, capacity, and love for the people and the party cadres, as Jayalalithaa had.

“It is my strong belief that Chinnamma has to shoulder the responsibility of the chief minister of Tamil Nadu, to take forward the party and to carry on the governance of the State, for the welfare of the people,” he added.