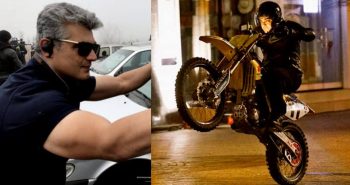 A video clip from the shooting location of actor Ajith Kumar’s next yet-untitled Tamil film featuring the star in a daredevil bike stunt, has sent his fans into a frenzy. The clip has been trending on Twitter.

A 30-second video byte of Ajith’s daredevil wheeling act is making rounds on social media which is going to make the fans ask for more and expect something very interesting from Ajith’s upcoming spy thriller in which the actor is playing an Interpol officer.

Not Easy to Bike Wheeling in Wet Roads Cuz of Snowing n AK Does it With Ease ! Reason Why @JorianPonomaref Amazed by Ajithkumar !#Thala57 pic.twitter.com/H4gVtnDZhj — Dinu Akshay 2.0 (@Dinu_Akshi) December 18, 2016.

The film also stars Kajal Aggarwal and Akshara Haasan. Produced by Satyajothi Films, the project has music by Anirudh Ravichander.