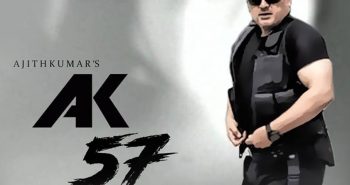 As a long wait for ajith fans that ajith’s upcoming movie is still under the name of AK57, so they are eagerly waiting for the name of the movie and recently the movie crew leaked the name.

and this movie is going to be a treat for ajith fans and he’s acting as a international police officer in this movie and also said to be he’s doing some stunts like james bond.

Ajith’s next movie title will start with “v”:-