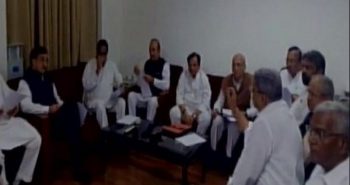 Opposition parties on Monday decided to take up unitedly with the Election Commission (EC) the issue of alleged EVM tampering in elections held in various states recently.

Leaders of various opposition parties on Monday met in Parliament and decided to jointly meet the Election Commission, demanding that their concerns on the issue be addressed.

The opposition leaders are demanding that VVPAT (paper trail of voting) be introduced in all future elections. The Congress has also been pushing for use of ballot papers instead of EVMs in upcoming elections in view of the alleged tampering.

The parties are demanding that the EC dispel the apprehensions they have and reassure the people of the country and voters on the serious issue.

The opposition parties observed that free and fair elections are the basic founding blocks on which the entire edifice of country has been maintained.

“Any erosion of these basic principles which sustain this edifice needs to be addressed forthwith and in the right earnest,” said a leader.

NCP leader Majeed Memon, CPI leader D Raja and RJD leader J P Narain Yadav were also present during the meeting and all decided to strongly raise the issue with the EC.