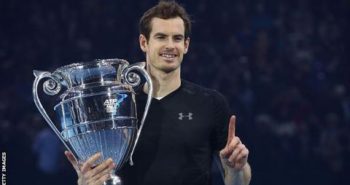 With the year-end top ranking on the line, Murray won the much-anticipated final 6-3 6-4 in one hour and 43 minutes at London’s O2 Arena.

It was a tour-leading ninth title of a remarkable season for Murray, who adds this prestigious crown to those won at Wimbledon and the Olympics.

He is the first player other than Djokovic, Roger Federer or Rafael Nadal to earn the honour since Andy Roddick in 2003.

“Obviously it’s a very special day, that I am playing against Novak in a match like this. We have played Grand Slam finals, Olympics, matches like this… Its been a tough rivalry. To finish the year as number one is something very special which I never expected,” Murray said.