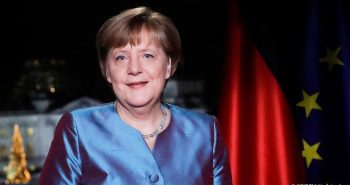 German Chancellor Angela Merkel has warned in her new year’s address of the terrorist threat facing Germany, saying that her government will take whatever steps are necessary to ensure the country’s security.

In her New Year’s speech, Chancellor Angela Merkel said that the past 12 months “tested us in many ways.” Among those, Islamic terrorism was “without a doubt” the “most difficult test.” The country saw a string of attacks throughout the year: in Würzburg, Ansbach and most recently, Berlin.

In her message, Angelea said,”All this is reflected in our democracy, rule of law and values. They are the opposite of the hate-filled world of terrorism and will prove stronger than it. Together we are stronger. Our state is stronger”.

“As we go about our lives and our work, we are saying to the terrorists: ‘You are hate-filled murderers, but you do not determine how we live and want to live. We are free, considerate and open’,” Mrs Merkel said.