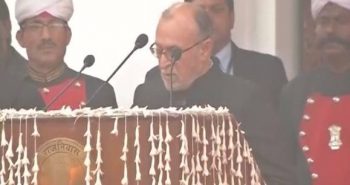 Anil Baijal, former union home secretary, took oath as the Lieutenant Governor of Delhi at Raj Niwas at 11 a.m. today.  Baijal was formally appointed as Delhi LG on Wednesday as a replacement of Najeeb Jung.

The former bureaucrat was also on the executive council of the think-tank Vivekananda International Foundation, several of whose former members have been appointed to senior positions by the Modi government including national security advisor Ajit Doval.