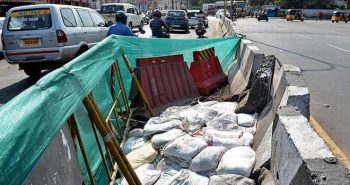 Anna Salai witnessed a suspected oil leakage from underground along the median  near the Holy Dargah Hazrath Syed Moosa Sha Khaderi  on Sunday.   Chennai Metro rail Officials have begun investigating the case.   They placed a few bags of sand to absorb on the road when they received information about a blackish liquid that surfaced below the central median on Anna Salai.  The possibility of an oil leak due to tunnelling  was ruled out by the officials.  “It can’t be due to underground Metro Rail work as tunnelling work in this part of Anna Salai was completed over 18 months ago.   We are investigating as to the source of the liquid,” an official said.   While the Metro Rail’s tunnel does pass through this area, the construction of underground Metro Rail stations, under progress, does not.  “The two TBMs in Anna Salai are currently boring near Church Park School,” an official said.Repair of sewer line damaged near Head Post Office on Anna Salai has begun said the CMRL Officials.  Due to repeated complaints about sewer blocks a check was conducted.  A pipeline was damaged and  that the resultant blockage could have been there for several months.   “The sewer pipeline was laid about 30-40 years ago and had suffered damage for a length of five metres due to Metro Rail work,” said a Metrowater official.  They duly informed CMRL officials.