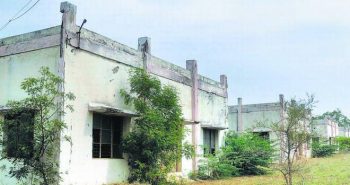 Tamil Nadu Adi Dravidar Housing and Development Corporation set up the Tirupur Apparel Park two decades ago.  It was launched with much fanfare but now it is in a pathetic condition.  100 sheds  have been constructed on the 100 acre park and it is remaining unused for a long time.  The area is poorly lit due to improper functioning of street lights.  The area lacks water supply.  “With the entire street lights dead, anti-social elements and tipplers are enjoying ‘unrestricted’ entry onto the campus during night hours,” said G. S. Arumugam, a former government school headmaster who is running a knitting unit at the park from the beginning, and Sudesh Kannan, another textile unit owner using the park for two decades.  The labourers are hesitant to travel for almost 10 km from the city as the toilets do not have water facility.  Out of the 100 sheds 74 units were sold for setting up knitting units.  The park was outside the city limits so many people did not show interest to set up units.  One of the authorities who wants the park to be rejuvenated accused the authorities of destroying the project.  “Selection of beneficiaries itself has been plagued by corrupt practices and nepotism.

“Those with real aptitude for entrepreneurship have not been selected which caused the downfall.  With unused sheds in a poor state, no new entrepreneur is going to join the venture,” he said.