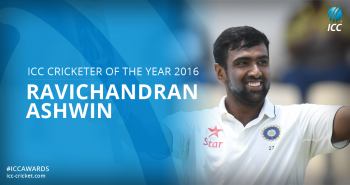 India’s ace off-spinner Ravichandran Ashwin, was named the Cricketer of the Year and the ICC Test Cricketer of the Year 2016 by the International Cricket Council on Thursday (December 22). He is now the third Indian cricketer to win the Sir Garfield Sobers trophy after Rahul Dravid (2004) and Sachin Tendulkar (2010).

Ashwin becomes the first instance of an Indian winning both these awards in the same year.

“I’d like to dedicate this award to my family. I’d like to thank ICC and most importantly my teammates,” Ashwin said.

“I’d also like to thank the support staff for our success. We’ve had a great transition ever since Mahendra Singh Dhoni hung up his boots.

In other awards, South Africa’s Quinton de Kock was named ODI player of the year and Pakistan captain Misbah-ul-Haq won the spirit of cricket award.

The women’s awards were handed out a week earlier, with Southern Stars captain Meg Lanning and all-rounder Ellyse Perry the Aussies in the team of the year.