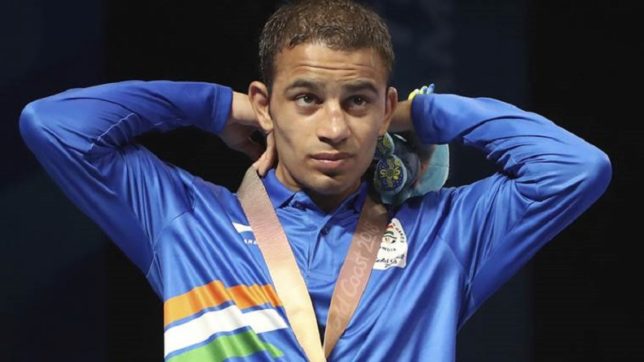 Amit Panghal (49kg) on Saturday became only the eighth Indian boxer ever to claim a gold medal at the Asian Games with a stunning tactical win over reigning Olympic and Asian champion Hasanboy Dusmatov in the summit clash here.

The 22-year-old Army man, the only Indian to make the finals, prevailed 3-2 against the more fancied Dusmatov, who had beaten him in a split verdict in last year’s world championships.

Today’s win marks the highest point Amit’s meteoric rise to the top, starting with an Asian Championships bronze last year. A world quarter-finalist, Amit claimed a silver in the Commonwealth Games. Earlier this year, he also won gold medals at the inaugural India Open and the prestigious Strandja memorial in Bulgaria.