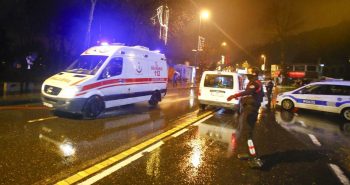 At least 39 people, including 16 foreigners, along with two Indians were killed and 69 others injured in an attack at people celebrating the New Year at the famous Reina nightclub in the Ortakoy area of Turkey’s capital city Istanbul around 1:30 am local time on Sunday. Officials of the US and Turkey called it a terrorist attack — the first in 2017.

Turkish police were hunting for an assailant, reportedly dressed as Santa Claus, who opened fire at a crowded Istanbul nightclub during New Year’s celebrations on Sunday,

President Recep Tayyip Erdogan vehemently condemned “the terror attack in Istanbul’s Ortakoy neighborhood in the first hours of 2017” and expressed sorrow for those who lost their lives, including “foreign guests”.

Beijing also condemned the attack. “China firmly opposes all forms of terrorism and is willing to work with Turkey and the international community to maintain regional and world peace and security,” Foreign Ministry spokes woman Hua Chunying said on Sunday.

There was no immediate claim of responsibility for the attack, and authorities did not name any suspects. The bloodiest attacks that Turkey endured in 2016 were the work of the Islamic State group or Kurdish militants.