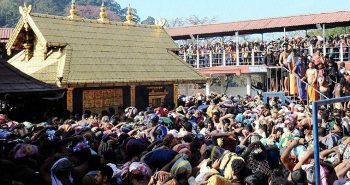 At least 40 pilgrims were injured, twelve of them were critical in a stampede at the Sabarimala Temple during the annual Manadalam festival on Sunday evening around 6:40 pm after a barricade gave way in the huge rush, authorities said.

The incident happened at about 7 pm near the Malikappuram temple, situated about 100 metres from the Ayyappa shrine.

The sources said most of the injured pilgrims are natives of Andhra Pradesh and Telangana.

According to the police, the hill shrine has been witnessing heavy traffic of pilgrims over the past few days. On Sunday, there was a heavy rush of pilgrims as it was the penultimate day of the 41-day ‘Mandala Puja’.