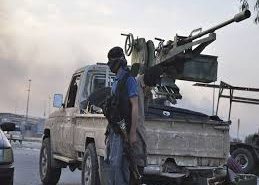 At least 50,000 militants from so-called Islamic State have been killed since the US-led coalition started fighting in Iraq and Syria two years ago, a US military official said.

The senior official described the figure as a “conservative estimate”.

Speaking about ISIS, the official said, “I give them credit for being so resilient.”

The last figure the Pentagon offered, from Lt. Gen. Sean MacFarland back in August, claimed 45,000 ISIS had been “taken off the field” overall, but this of course was not all people killed. The officials insisted that the huge death toll proved that the war has been “effective” in combating ISIS.

But while 50,000 is a lot of dead people, it’s not clear how much it has impacted ISIS’ force size, as the group has through most of the war shown an ability to recruit new fighters. Indeed, despite claiming 50,000 ISIS fighters killed, the US has never estimated.