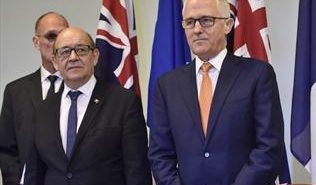 Australia and France formally sealed an agreement Tuesday to build the world’s largest diesel-electric submarines in the Australian industrial town of Adelaide.

French Minister of Defense Jean-Yves Le Drian arrived in Australia on Sunday. Together with Australian Prime Minister Malcolm Turnbull, he announced that they are set to sign a contract in the Australian city of Adelaide on Tuesday, AFP reported.

“This is a critically important step in the development of our security, in the assurance of our government in delivering Australians the security and prosperity that they need,” Australian Prime Minister Malcolm Turnbull said.

According to the details disclosed, the manufacture of the submarines will be carried out by the naval builder DCNS, 62% of which is owned by the French State, which was chosen several months ago for the design, manufacture, maintenance and training of the personal.