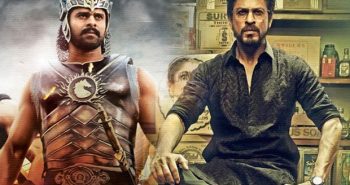 Baahubali 2 is one of the most awaited sequels of all times for so many reasons, one, we will finally know the answer to why Katappa Killed Baahubali,  two to see yet another masterpiece directed by SS Rajamouli.

Director SS Rajamouli took to twitter to confirm that the shooting of Baahubali 2 starring Prabhas is finally complete, is currently in the post production stage and the period drama is confirmed to release on 28 April 2016. As per the latest buzz, the teaser of magnum opus Baahubali 2 will be attached to Shah Rukh Khan‘s Raees which is set to hit the screens on January 25.

“The Baahubali 2 teaser will be launched around January 23-24. It will be attached to the prints of Shah Rukh Khan’s Raees, which releases worldwide on January 25,” a source from the trade told DNA.

“Anil Thadani is distributing both the films. He has even got into a barter deal with most single screens where he’s decided to sell Baahubali 2 to those screens only if they take up Raees as well. That is helping the SRk-starrer action flick also, given that it’s clashing with Hrithik Roshan’s Kaabil. So Baahubali 2 teaser coming out with Shah Rukh’s Raees is a well-planned idea,” the source added.

Shah Rukh Khan: None of my performances has deserved a National Award