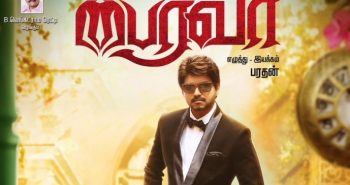 Vijay starrer Bairavaa is currently in the post production phase and there is now news about the audio launch of the flick.

The audio launch celebration of Tamil biggie Bairavaa has been canceled and it has a strong reason for it too. It is nonetheless expected too.
The death of the beloved Chief Minister of Tamil Nadu, Jayalalithaa has been cited as the reason for the cancellation of the audio launch function.
Directed by Bharathan the teaser of the movie which was released recently has crossed one crore views.

The film which has Keerthy Suresh playing the female lead is slated to release on Pongal 2017.

The flick is produced by Vijaya Productions banner, while music is by Santhosh Narayanan.