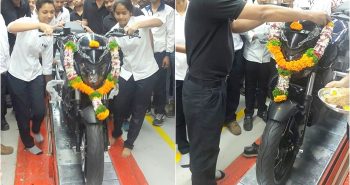 Bajaj Auto has begun production of its soon to be launched Dominar 400, the 400cc cruiser motorcycle. The new motorcycle gets the name Dominar after it was rumoured to be named as Kratos. Bajaj Auto has rolled out first batch of 400cc motorcycle from Chakan, Pune plant exactly 15 years after the launch of Pulsar sports bike in India. The first batch of Dominar from the plant is managed by women engineers alone. The Dominar brand will be slotted above Pulsar and Avenger series. The motorcycle is set to go on sale in mid-December, it said in a statement on Friday.