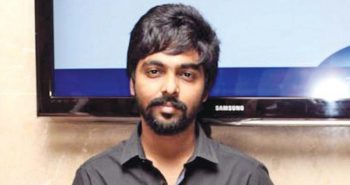 At a time when many big heroes vie to act in national award-winning director Bala’s films, the young music composer-turned-hero GV Prakash has been chosen by the filmmaker for his next. Recently, we reported that Suriya’s actress wife Jyothika was the first one to be roped in for the project. Working with GV Prakash is not new to Bala as the duo has collaborated earlier for the movie Paradesi, where the former scored the music for the film. The Naan Kadavul filmmaker, who is a man of few words, had praised GVP’s music in Paradesi and even said, “GVP’s humbleness and maturity at a young age amazes me.”

Close sources tell DC that the Aadukalam composer was thrilled when he got a call from Bala’s office. It was surprising for him and he could not believe it. And yet another source confirmed that Bala, who is known for his realistic scripts, is attempting to make a thriller for the first time. The leads, Jo and Prakash, are two strong individuals around whom the story is woven. While Jyothika is a police officer, Prakash essays a role with negative shades to it.

Though it is a thriller, the film will be in Bala’s style of narration with un-guessable twists and turns in the movie. The team is considering four to five titles and soon will lock in on one of them, a source from the unit says. A photo shoot was a done with GV for the film a few days ago. Bala also completed one such shoot with Jo in a cop’s uniform earlier. Keeping GVP only for acting, Bala has preferred Ilaiyaraaja and signed the legend for the music of the film.