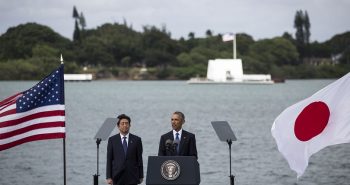 In a historic pilgrimage, the leaders of Japan and the United States took to the hallowed waters of Pearl Harbor on Tuesday to prove that even the bitterest enemies can become allies. Prime Minister Shinzo Abe did not apologize, but conceded Japan ‘‘must never repeat the horrors of war again.’’

Obama called Abe’s visit a “historic gesture” not only because he was the first Japanese leader to visit the USS Arizona Memorial, the resting place for more than a thousand sailors and Marines killed in the attack, but the presence of the two marked the first joint visit to Pearl Harbour by US and Japanese leaders.

In his remarks, Obama said Abe’s presence  “reminds us that wars can end” and “the bitterest of enemies can become the strongest of allies; the fruits of peace can outweigh the thunders of war. This is the enduring truth of Pearl Harbor.”

“As the prime minister of Japan, I offer my sincere and everlasting condolences to the souls of those who lost their lives here as well as to the spirits of all the brave men and women whose lives were taken by a war that commenced in this very place, and also to the souls of the countless innocent people who became the victims of the war,” Abe said later at nearby Joint Base Pearl Harbor-Hickam.