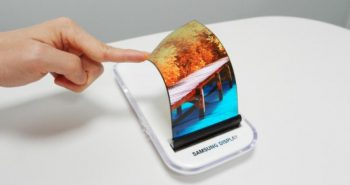 Smartphone makers are striving to bring disruptive technologies to its devices. With every launch of a new smartphone, the companies are bringing bigger displays, enhanced cameras and advanced biometric security features. But the next big upgrade in the smartphone market will surely be the bendable smartphones.

Samsung is allegedly working on its bendable smartphone, while tech giants such as LG and Lenovo are exploring the idea of a bendable display. If the reports are to be believed, Samsung will be the first to launch a foldable display smartphone in 2019. The smartphone is reportedly dubbed as Galaxy X and will feature a flexible OLED display.

But scientists from the University of Exeter have developed a new material that offers more flexibility to smartphone developers. To achieve more flexibility, the innards of the device should also be flexible. The newly created storage system made from graphene will replace the current flash memory in smartphones and other types of devices.

The bright side is that the hybrid graphene oxide-titanium oxide memory only takes 5 nanoseconds to write and read data. The length (50nm) and thickness (8nm) provides smartphone makers with enough scope in terms of design and functionality of the phone.

The new material is also a good conductor of electricity, which would make it suitable for integrating in smartphones. But there is one disadvantage of this material; a complex process is required to produce it. According to reports, Samsung has already invested in research related to graphene and the company even filed some patent applications mentioning the material. It will be interesting to see if the storage memory units made out of graphene will ever make it to flexible smartphones, but the material seems to be the best candidate for this.