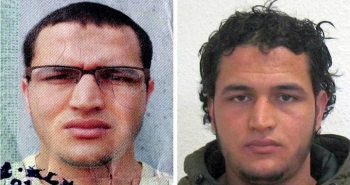 German police launched a manhunt Wednesday for a rejected asylum seeker suspected of involvement in a deadly truck assault on a Berlin Christmas market claimed by the Islamic State jihadist group.

Officials said asylum office papers believed to belong to the Tunisian man with alleged links to the radical Islamist scene were found in the cab of the 40-tonne lorry used in the attack that killed 12 people and dozens were injured.

The suspect has been named as 24-year-old Anis Amri. Amri is feared to be armed and dangerous, and appears to have used six different aliases and three different nationalities.

A wanted poster issued by Germany’s federal prosecutor offered a reward of up to €100,000 for members of the public who helped to locate Amri, who is described as having worn dark clothing, bright shoes and a white scarf on Monday night.

Over 54,000 people evacuated from German city after a 1.8- ton WWII bomb found