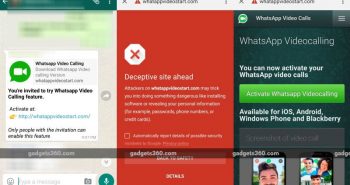 WhatsApp recently announced the launch of its video calling feature which has started to roll out for Android, iOS and Windows Phone users. While the news is welcoming, many users are receiving as well as sharing an unverified link on WhatsApp which is said to be an invite to activate the video calling feature.

If you’re getting forwarded messages/mails, inviting you to get the video calling feature on WhatsApp, then you’ve been warned. Do not click to open the site, and opt to activate video calling, as this whole thing is spam.

The link, whatappvideostart.com, is a fake smokescreen attempt, created by hackers to enter into his/her system. It’s easy to fall into these guys’ traps, but as responsible internet users, it is better to keep an eye for whichever URL you open your mobile/PC.

This is the ad which has been doing the rounds online over the past couple of hours. This is how it reads;

You’re invited to try WhatsApp Video Calling feature. Only people with the invitation can enable this feature”. Once you click on the link, it takes you to a website, which otherwise appears quite believable.