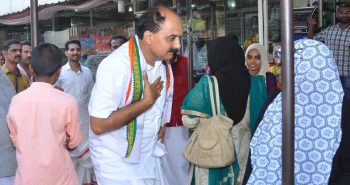 Beef has come to tempt the voters of Malappuram with BJP candidate N. Sreeprakash promising to give it to them on a platter brought directly from air-conditioned slaughter houses.

Even die-hard fans of IUML candidate P.K. Kunhalikutty would have been moved by the irresistible offer of halal beef made by Sreeprakash on Saturday with a view to stump his rivals.

But the BJP state leadership is not amused by his electoral bait which may also offend BJP Chief Ministers like Adityanath of UP and Raman Singh of Chhattisgarh who threatened to hang all those who kill cows.

There is no ban on beef in Kerala, but Sreeprakash promised to supply good beef from clean slaughter houses. He clarified that the BJP was not against beef consumption, but only against illegal slaughter houses.

“There are slaughter houses providing unhygienic meat of dead cows. The BJP-led governments’ crackdown in North India was against unlicensed slaughter houses. They can still work with proper licences. If I win in Malappuram, I will provide quality beef within the legal framework. Air-conditioned and well- equipped slaughter houses and beef outlets will be set up here,” Sreeprakash told reporters at the Malappuram Press Club on Saturday.

It may be recalled that Asaduddin Owaisi, All-India Majlis-E-Ittehadul Muslimeen Party president, had slammed the BJP national leadership on the issue of cow slaughter on Saturday.

“This will affect the prospects of the BJP though it was expecting its vote base to increase from 64, 705 polled in the 2014 LS election to 1.50 lakh,” he said.

“It is sad that Sreeprakash is trying to dilute the ideologies of the central BJP leadership against cow slaughter though beef is easily available in the state. It shows his immaturity which will boomerang on him,” he said.

The BJP hopes to encash on the increase of one lakh voters in Malappuram constituency since the 2014 LS elections. It thinks that the traditional Hindu voters’ strength has gone up. But with hardly nine days left for the by-election, the state BJP leadership does not want to create any unwanted controversies that may affect its chances.