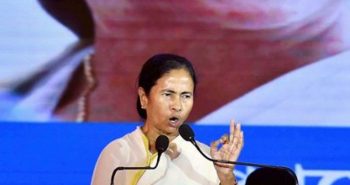 Trinamool Congress MPs raised the issue in Rajya Sabha, which led to ruckus in the House. “Act against BJP leader who threatened Mamata,” a Trinamool MP said.

Union minister Mukhtar Abbas Naqvi disowned the comment in the Parliament, saying “I condemn this type of statement. The state government can take proper action.”

The threat was issued by Varshney, a leader of the Bharatiya Janata Yuva Morcha (BJYM), after the police in her state used batons to disperse a rally raising slogans in praise of Lord Rama on Hanuman Jayanti.

“Mamata government beat up people. If someone was wearing a red shirt or a red pant, they were beaten up brutally by the police. I don’t understand…Mamata Banerjee organises Iftar party, she argues for the Muslims. I want to ask her are Hindus not human?”

“If they had any humanity, they wouldn’t have beaten up like this. If anyone brings me her severed head, I will give that person Rs 11 lakh,” Varshney said while criticising the police action on the rally.

On Tuesday, police in Suri in West Bengal’s Birbhum district used batons to disperse a rally which shouted slogans in praise of “Shri Ram”.

The police had set up an iron barrier which those in procession tried to break, prompting the law-enforcers to make a lathicharge.

At another place on the outskirts of Suri, thousands of people had ignored a police ban to participate in a rally taken out under the aegis of an organisation observing Hanuman Jayanti.

The Suri Police had on Sunday told the organisers of Bir Hanuman Jayanti that it would not allow holding of any rally or meeting on Tuesday.

Yesterday, the organisers had asked the police to allow the rally after assuring that they would not carry arms.

However, the police did not budge from its stand. West Bengal general secretary of BJP Sayantan Basu had yesterday alleged at a press meet at the party office that

“The district administration at first had accorded permission, but later withdrew it on order of the TMC bosses.”